Michael C. Sahd, writer of fantasy, horror, and science fiction, published his first short story, Assassin Marked, in 2017. Keep an eye out for his upcoming novels, The Unfettered Child (scheduled for publication on August 28, 2019) and Lavender Rose.

The revised Assassin Marked is available on Amazon Kindle! Pick up yours today.

Damian DuFonte, a professional assassin working for the Crime Syndicate, just can’t seem to get past his need for revenge. So when the only woman he’s ever loved asks him not to kill one of their bosses, her pleas fall on deaf ears. Although Victoria may be willing to forgive this transgression, the Syndicate certainly will not.

To prove Victoria’s loyalty, the Syndicate tasks her with leading a group to hunt him down. Somewhere in the solar system, on the outs with his lover and on the run from trained killers, Damian is … an Assassin Marked.

Assassin Marked, a short story, is the first publication by Michael C. Sahd, but most certainly not his last. 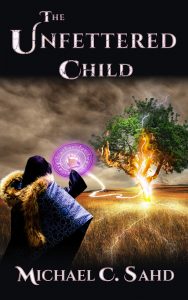 An upcoming novel by Michael C. Sahd. Working title and cover above.

Although not yet published, The Unfettered Child is the first full-length novel written by Michael C. Sahd. Available August 28, 2019. Pre-order now! 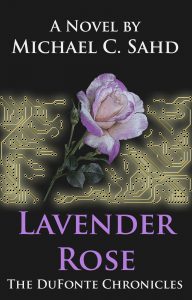 An upcoming novel by Michael C. Sahd. Working title and cover above.

Damian, hiding in one of the few cities left on the frozen wastes of Earth, is discovered and hired by the mob to carry out one last job.

This job will eventually reunite him with his lover Victoria and redeem his relationship with the mob. But in an unexpected turn of events, Damian finds himself entangled with the war resistance from his past, and protecting a young genius hacker, Lavender Rose.

Together, Damian and Lavender find themselves at odds with both the law and the mob.

Will Lavender convince Damian to join their cause?

Lavender Rose is the continuation of Damian DuFonte’s story. It currently has four chapters completed and is already twice as long as Assassin Marked.