During my previous three Making of a Cover posts, I told of my adventures during the week leading up to the photo shoot. Designing the cover in Photoshop had actually started weeks before that. I had so many projects going in the design of this book! Before I had my model, I had created various working covers to choose from, along with a number of text fonts to try out. Layouts, backgrounds, foregrounds, ideas upon ideas. Well, just look at them all: https://www.facebook.com/pg/MichaelCSahd/photos/?tab=album&album_id=671475539957154

I really disliked these covers, but they were improving as I went along. The typography was another mess, and like with many of my other ideas, I turned to social media to request help deciding what to pick.

Using social media to help me decide what looks better turned out to be a very smart move, not only because my followers let me know their thoughts on the designs, but also for another reason that I will discuss in a bit.

Now came the fun part. I had my pictures from the photo shoot, and I needed to make a cover. Unfortunately, the pictures at the park didn’t sit right with me. The environment in the cold mountains of Aaruda are not the same as the humid briar lands of central Texas (Aaruda is what I named the world that Samara lives on, but it’s not really mentioned in the story. The inhabitants don’t often use the word for their planet, but I will definitely say more about it later. Maybe in another blog post, maybe in another book).

Before I could start making the cover, I had to rifle through over 200 images to find something I liked and wanted to use. The image above is the one I finally settled on.

Then I had to get a background I was okay with using. For this, I turned to Pixabay, where I found this neat photo of a tree being struck by lightning.

Next, I had to remove the figure from the background. This is not an easy task. Any Photoshop user can tell you, hair and fur are a pain to separate from a background, even a green one. This gave me such a headache. This process is so difficult that my first two attempts were very shoddy.

Take a close look at the hair and the fur. I’m sorry, but it’s terrible. She’s got some weird spiky thing happening at the edges. What happened is, in an attempt to get rid of the green screen, I had to desaturate the green in the image around the edges, making them appear dark. Hence the reason for the darkness at the tips of the fur.

I really, really disliked this and turned to Youtube to figure out a method to fix it better. What I found was instructions on how to paint hair back into the picture. So I recut out the model and got to work repainting the hair after the cut. I was very satisfied with this, and almost called it good:

However, before I washed my hands of it, I returned to social media to get opinions on my work, and let me tell you that I’m so glad I did. Three artists from the #artistsoftwitter community came to my rescue.

These artists (@ZenFuryBuddha, @GDNaturedVLLN, and @SaraGSpaceNerd) provided me with numerous tips on how to improve this picture even further. GDNatured even went so far as to do a quick example for me:

I did like GD’s image, and I may have used it if the resolution were a little higher, but I jumped back into Photoshop and Youtube and started back to work on the cover.

Finally, I had something I was completely satisfied with:

I would love to hear some feedback. What do you think of the final cover? Does it pull you in? Would you grab this book off the shelf if you saw it in the store? Let me know in the comments below. 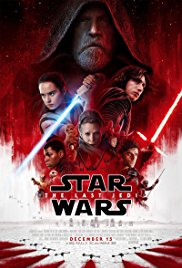 So, the newest Star Wars is out and, apparently, fans are mad. I understand. Although I enjoyed the movie, it left many of the questions I hungered for the answer to . . . hanging. Actually, not just hanging; they basically wrinkled them up and tossed them into a furnace.

But I’m sure you don’t want to hear another nerd rant, so enough about Star Wars. If you really want to know more about my opinion, feel free to drop a comment below.

On a different note, I have been editing a story for an acquaintance in exchange for some artwork. I’m sure you’ve all heard about my continual issues with artists, but hopefully, this will be a mutually beneficial exchange. The idea behind his story shows promise, and after a bit of tidying up, it should be an excellent read for anyone interested in the fantasy/superhero genre. After seeing the artwork that he has previously created, I feel hopeful about his ability to provide me with greatly improved cover art.

In the past, I always felt that writer’s block was my biggest problem. After finally finishing a piece and readying it for publication, I find that finding an artist poses a much more harrowing task, especially when low on funds.

At least with writer’s block, my issues stem from self-induced obstacles, but finding an artist is beyond my control.

Over on Goblin Savant, I had my friend Ian illustrate Gerald der Zeichner, the Goblin Savant. However, finding suitable art to portray my protagonist in Assassin Marked proved nearly impossible, and after months of searching, waiting on the good graces of others, I decided to dust up my own Photoshop skills. I created a very plain cover in art noir that I am extremely pleased with.

Please feel free to let me know what you think, either as a comment here or as a submission via my contact form. While you’re there, don’t forget to sign up for my monthly newsletter for your chance to win a prize.