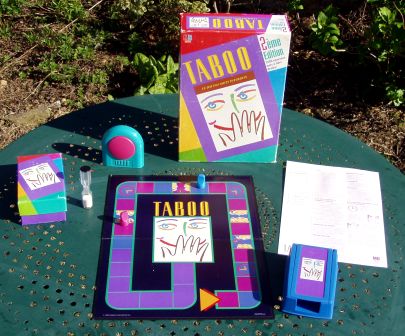 Saturday evenings, we visit our local comic book shop for board game night. This evening, we played a game called Taboo. To play the game, a minimum of four players must split into two groups. One player on the team draws a card that the player must use to give hints to the others on his/her team so that they can guess the word at the top of the card.

The clue giver cannot use the word or any parts of the word. In addition, the card lists five or six related words that are taboo, meaning that the clue giver must avoid using those words in their hints as well. Guessing the word will score the team a point; however, if the clue giver uses a taboo word, the team loses a point. A short timer allows the team to guess as many cards as they can in the time limit, then the other team gets a chance to score points.

When writing a story, there are also taboo words; we call them “to be” verbs. A writer should avoid using these words as often as possible, because, more often than not, a more colorful verb will describe a better action. Sometimes “to be” verbs are required . . . er . . . . Sometimes a sentence requires the use of “to be” verbs, such as sentences that fail to describe an action. A couple of examples of sentences devoid of action include:

“My name is Michael.”

“Black is my favorite color.”

Take a look at something you recently wrote. Try removing “to be” verbs from your writing and compare the before and after. Did you find that making these changes paints a more colorful story? I typically do.